Little-known fact: The /r/ sound is one of the most common sounds in the English language. In fact, it’s used in words most frequently than almost any other sound.

And it’s also one of the most difficult and complex sounds to make!

Speech errors with the /r/ sound are very common in children. For some kiddos, speech sound disorders will naturally be remediated over time. For others, these impediments can persist into adulthood.

Children who struggle with their /r/ sound production may sound less “mature” than their peers. For example, they may substitute a /w/ sound for an /r/ sound, saying “wing” instead of “ring.” Or they may produce distorted sounding /r/ sounds, saying “fath-uh” instead of “father,” or “dee-uh” instead of “deer.”

As you can imagine, this impacts not only a child’s intelligibility, but also their confidence and self-esteem. This effect can be heightened once they enter school. Children are keen observers of their environment, and once they’re suddenly surrounded by peers, they can become self-conscious about the way they sound and talk.

Let's review when children should be able to accurately produce the /r/ sound, why the pesky /r/ sound is so challenging to pronounce, and how to help improve your child’s articulation.

When should children correctly say the /r/ sound?

Every child develops on their own timeline. Speech errors and mispronunciations are common in all children as they grow and develop. However, there are developmental milestones and age ranges when children are expected to have mastered certain sounds.

Here's a good rule of thumb: If your child has entered kindergarten and is having difficulty with /r/ productions, yet they can generally be understood by strangers, there’s a higher likelihood that they’ll naturally improve over time and with a bit of practice.

However, from a clinical perspective, children should be able to correctly pronounce /r/ sound in words by around 7 years of age, or once they enter second grade.

This doesn’t necessarily mean you need to “wait and see” until they’re 7 before helping to remediate the issue, especially if your child is clearly struggling. It’s appropriate to start working on correcting /r/ sounds as early as age 5. In many cases, the earlier a child receives professional help from a speech therapist, the more progress they make toward their communication goals.

Several steps are required to correctly produce a sound. While these may come naturally to you, there’s actually a lot of anatomical coordination that’s happening behind the scenes. Producing a sound correctly requires having an understanding of the desired speech sound, as well as the ability to coordinate mouth movements (the jaw, tongue, and lips) with breathing to produce an accurate vocalization.

Let’s review a few common reasons why the /r/ sound can be so tricky!

There are different ways to produce the /r/ sound. Let’s do a quick exercise. Practice making a /b/ sound and an /f/ sound. Notice how with the /b/ sound your lips touched together? And with the /f/ sound you bit your lower lip? Regardless of where these sounds are placed in a word, the mouth movements stay relatively consistent. This makes it easy to explain to children. In addition, you can pay close attention to their mouth movements to see where the error is occurring.

The /r/ sound is influenced by its position in a word. Try saying these three words consecutively: “round,” “corn,” and “laser.” Did you notice that the /r/ sounds different depending on whether it’s located in the beginning, middle, or end of the word? Now try looking in the mirror and saying each of the words slowly, prolonging the /r/ sound. This goes to show just how many possible variations of the /r/ sound there really are!

The /r/ sound is also impacted by its successive vowel. To add another layer of complexity, the vowel sound that succeeds an /r/ can also affect how it’s pronounced. Try saying aloud the six different vocalic /r/ combinations: ar, air, ear, er, or, ire. Each of these make distinctly different sounds, with the /r/ taking on characteristics of the vowel and changing its pronunciation within a word.

This is all to say there’s not one way to pronounce an /r/ sound--there are many. In fact, when you combine these vocalic combinations, along with the position of the /r/ within a word, and a few other factors, there’s over 30 distinct and separate /r/ sounds. That’s a lot! This explains why mastery of the /r/ sound comes much later in a child’s developmental cycle, and why so many kiddos struggle with accurate production.

How to help your child with the /r/ sound

Since there are over 30 different /r/ sound variations, it’s important to first identify and isolate which ones are causing your child trouble. For example, they may find it easy to blend the /r/ sound with consonants, like /br/ or /dr/, but struggle with certain vowel combinations. Without a proper screening or assessment, it can be hard to locate the problem.

This may be easy to identify by simply running through different /r/ scenarios with your child. However, it's generally recommended that parents and caregivers seek help from a speech-language pathologist. These communication experts will perform a comprehensive evaluation to pinpoint exactly which /r/ productions are inaccurate. They'll also determine how your child is coordinating their jaw, tongue, and lip movement. They’ll use this information to create a personalized treatment plan that will focus on correcting your child's speech errors.

Once the problem has been located, it all comes down to practice and repetition. Speech therapists will use many different techniques, cues, and activities to help children identify accurate vs. inaccurate production, improve their articulation, instill good speech habits, and reach their communication goals. Once children master saying the /r/ sound in isolation, they’ll work on combining it with vowels, producing it within words, and then eventually incorporating it into phrases, sentences, and conversation.

Like all speech and language skills, the more you practice at home and incorporate techniques into your child’s everyday routines, the more progress they’ll make!

When children frequently practice speech at home, they make more progress towards their communication goals. In this article, we share helpful tips parents can use to make speech practice the best part of their child’s day! 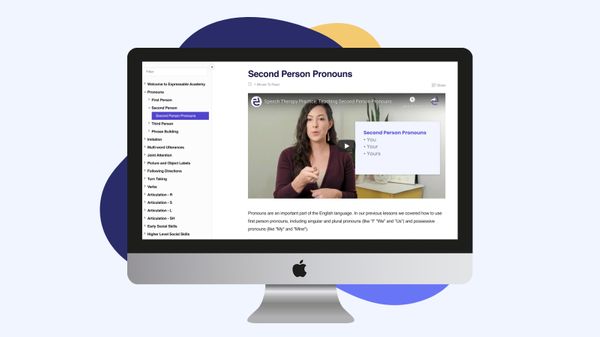 We founded Expressable with a simple mission: to improve access to quality speech therapy services by making it affordable, convenient, and effective. Core to our mission is to support individuals